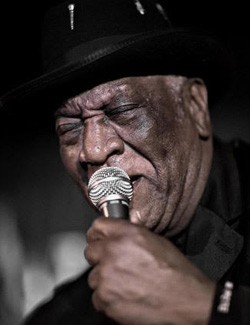 Big Pete Pearson is Arizona's King of the Blues. He has ruled the Phoenix blues bars since the late 1950's. His physical stature and overwhelmingly strong voice command attention. Off stage, Pete can be found with a snifter of Christian Brothers brandy in hand as he joyously greets his many fans.

He is a father figure to many local bluesmen and blueswomen who have cut their teeth playing in his band. Though highly regarded locally, Big Pete's greatness is still one of Arizona's best kept secrets. Today, you'll find Big Pete backed by four of the nation's finest young blues entertainers. Each is a master blues musician.

Born in Jamaica on October 4, 1936, Big Pete landed in Phoenix by way of Austin, Texas. He was raised by his grandparents in St. John's, a Baptist community just outside Austin. His grandfather was a minister and his grandmother ran a local mission. "I kinda got on my own at an early age and I was into music full force. I've always loved music," Pete says. His grandparents arranged for piano lessons. "I despised the piano, but I took lessons anyway because it was music and I didn't care." He eventually learned how to play guitar and bass. "My grandma was the one who taught me to use my voice," Pete says. She would sit me down and teach me how I should express my words. She told me, "When you hit a high note, you turn it loose...you bring it from here'"..he rubs his ample belly.

He was known as L.P. Pearson in Austin and played his first gig at age 9 at the Triple J, a local beer joint. His grandparents thought he was playing guitar and singing with a spiritual group at the church. Big Pete was a regular at the juke joints on the east side of Austin such as The Victory Grill, Charlie's Playhouse, Big Mary's Bar & Grille, Ernie's Chicken Shack and Sam's Showcase. "Playing in the jukes was dangerous, dangerous, man, real dangerous," says Pete. "But I played them anyway and those were my up days." Pete played the three string bass with the Jets, fronted by Blues Boy Hubbard, and frequently sat in with T.D. Bell and the Cadillacs. Big Pete's cousin is the famous W.C Clark. Pete was a major influence to his now famous cousin W.C. Clark, who said in an interview: "I had a cousin -- I've got a cousin -- Big Pete Pearson. He was my biggest influence. He was already singing the blues, and playing the blues, and he got me into it. I followed in his footsteps. He's still going, and I am, too." W.C. adds, "Big Pete is a man that has a lot of little boy in him and is so full of jolly." Big Pete first came to Phoenix in the late 1950's and settled in the mid 60's. The late Duke Draper gave Big Pete his first gig in the desert. Big Pete went on to join and record with Jimmy Knight and the Knights of Rhythm.

These vintage sides though never issued should see the light of day on a Phoenix R&B anthology that is forthcoming on the German Bear Family label. From the 1970's on, Big Pete fronted a number of bands with a variety of names~~Driving Wheel, The Detroit Blues Band and the Blues Sevilles. His bands not only maintained Pete's high blues stature but would be both a camp for experienced veterans and a training ground for up and comers. Band alumni include saxophonists Bernard Williams (of Dyke And The Blazers fame), Bob Tate, Fred Robinson and Emerson Carruthers, guitarist T.D. Bell, Lucius Parr, Scotty Spenner and Tommy Dukes, harmonicist Bob Corritore, keyboardist Dr. Fish and drummers Elmer Scott and Delmar Stewart, to name a few. Big Pete has worked with blue legends Ray Charles, BB King, Muddy Waters, John Lee Hooker and others.