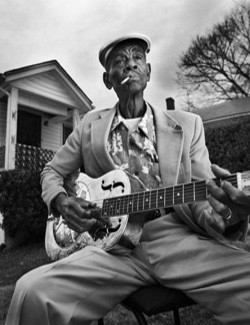 John Dee Holeman and Fris Holloway are master bluesmen, buckdancers, and longtime friends. They live in Durham, a tobacco town that has long attracted talented and influential bluesmen such as Blind Boy Fuller, Reverend Gary Davis, Arthur Lyons, and Thomas Burt. The deep blues tradition created by these local musicians constitutes the roots of the music that John Dee and Fris play. They have updated this older Durham blues tradition with their own touches of urban blues, jazz, and rhythm-and-blues.

Born near Hillsborough in rural Orange County in 1929, John Dee has been singing blues and picking the guitar since the age of fourteen. "I'd sit around the barn, keeping the fire to cure the tobacco," he remembers. "For my entertainment--with this guitar, you know--I'd bang on it. I kept on doing that [and] picked up a few chords. He has been "kind of apt," he says, at "catching on." He soon began entertaining at birthday celebrations, corn shuckings, wood choppings, and house parties. After a move to Durham in 1954, he began incorporating more modern blues into his repertory.

Through friends in Durham, Holeman met Fris Holloway, a pianist who performs an extensive repertory of blues and jazz tunes that he learned by ear. Fris was born in 1918 near Durham and grew up in Durham County. "My daddy was a chauffeur," he says, "and some people gave him an old piano and that's the way I started out. I guess I always have just loved music. My mother would have to run me out of the house to go to school, because I was trying to hear the music on the radio."

Together, John Dee and Fris have carried their music making to pig pickings, parties, and other social occasions in and around Durham. Their somewhat different repertories, each one a mix of urban and rural music, complement one another perfectly.

When they take a break from playing, they will occasionally show off their expert buckdancing skills. This solo dance is often informally competitive as dancers (usually males) vie for the crowd's attention and applause. It can be performed without instrumental accompaniment, emphasizing the sounds of the floor, or it can be accompanied by music, handclapping, or "patting." Patting, the way Holeman and Holloway accompany each other, produces percussive sounds on the musician's own body as subtle and complex as those of master drummers.

Although they are not professional musicians or dancers, John Dee Holeman and Fris Holloway have an extraordinary musical expertise that has put them in demand outside their home area. They have traveled through the state as participants in North Carolina's "Black Folk Heritage Tour," worked throughout the South in a highly successful "Saturday Night and Sunday Morning" tour, and twice traveled overseas where the Arts America Program of the United States Information Agency sent them as part of a folk music tour in Southeast Asia and Africa. John Dee received a Heritage Fellowship Award from the National Endowment for the Arts in 1988.